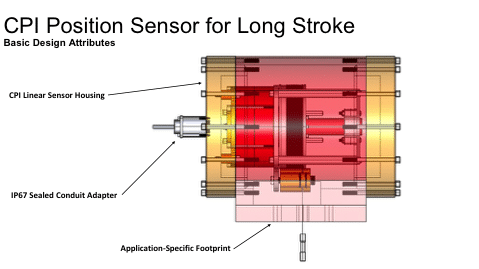 Traditional Linear Position Sensor technologies (ie. Magnetostrictive sensors) used in hydraulic cylinders have been limited in their ability to function in high temperature environments. One of the strongest applications for CPI SL series sensors are in these high temperature hydraulics applications, when you need to function reliably for long periods under an extended temperature range. These larger power hydraulics are commonly found in offshore oil & gas drilling, mining operations, steel mills or heavy outdoor equipment.

What Temperature is Your Sensor Rated For?

CPI Linear Position Sensors have been Qualified to operate up to 300F (150C). That is 50% more than highest rated temperature of so called “Extended Temperature” magnetostrictive sensors.

Don’t forget that even in scenarios where ambient air does not reach stated limits, there are many factors that contribute to the effective operating temperature seen by the sensor.

Add to all this, operation in the sun on a hot day, on a plastics assembly line, or near the cauldron of your steel plant, and you’ll find that the typical 185F rating of most magnetostrictive sensor electronics is quickly exceeded. Some manufacturers have gone as far as to specify expensive cooling systems to preserve the life of these very-hard-to-replace-when-they-fail sensors. In other cases, the complex sensor electronics can be upgraded to special high-temperature rated components, but at many times the cost of the original sensor. A third option is to remove the most sensitive electronics to a cooler area.

One of the primary effects of high temperatures is to create a loss of accuracy referred to as “sensor drift”. Depending on the tolerance needed by your application this can become an issue if your sensor is inherently vulnerable to this (magnetostrictive sensors). Often software can compensate for this drift but this increases the complexity of your control system.

Another more series issue is component failure. Repeated exposure to high temperatures can greatly shorten the life of a sensor as measured by MTBF (Mean Time Before Failure). In general, MTBF is rated at 25C and drops in half for every 10C you go above the ambient rating. It is in this area that magnetostrictive sensors show one of their most glaring weaknesses for high endurance applications. Replacing these sensors typically requires complete shutdown of the equipment for an extended period and disassembly of the cylinder to fish out the “rod”. Field replacement depends on having a rod of the exact length available at the job site as every magnetostrictive sensor waveguide length must match the stroke length of the cylinder exactly for proper operation.

The SL1500 – The Cadillac of high endurance position sensors.

CPI position sensors were specifically designed for the ultra-durable segment of the market where hydraulics are asked to do their work reliably and accurately under the most difficult operating conditions on the planet. Because our technology is inherently different than the complicated physics and electronics of magnetostriction, we suffer none of these shortcomings and are ideal replacements for this technology wherever long stroke, high power, high temperature environments are found