In the old days of manual stick shifts, attemps to start a vehicle when the car was not in neutral provided some serious kinetic feedback in the form of a lurch forward or backward. It is not hard to imagine that many a fender bender or worse may have been caused by an ill-advised start up or failure to engage the clutch.

Automatic transmissions went a long way to solving this problem, by simply refusing to turn over the engine if the car wasn’t in park or neutral. The same evolution occurred in commercial and military vehicles of course but the stakes were higher and the operating environment was far more stressful than that found in your average Honda Accord.

These days, just about every vehicle made has a neutral safety system in it. And for a good number of those commercial and military applications, our J4 ball switch is the hard-to-kill solution to front lines neutral detection.

How Does it Work?

Typically used in these applications is a variation of the J4 ball switch, which is designed to be both very small, and extremely immune to heat, airbourne contaminants, and vibration. 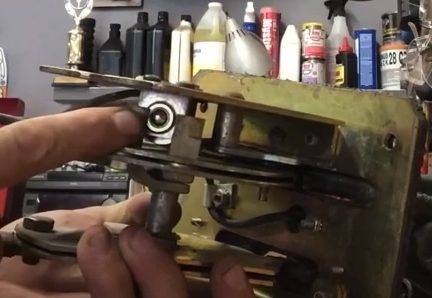 The J4 is typically mounted to the shifter assembly, where its compact form factor and highly repeatable travel and actuation parameters make it an extremely precise mechanism over thousands and thousands of cycles. As seen in the photo of a Humvee shifter assembly, tabs that correspond to the neutral and park positions of the shifter, will actuate the ball switch. The key engineering feature that makes this switch stand out is its patented double seal design which is not only waterproof, but actually removes microscopic particulates from the housing every time you press it, making it even more immune to dust, oil and other airborne contaminants.

The J4 has been used in this application by Allison transmissions, who is putting these into Humvee’s and other military vehicles. The Bradly fighting vehicle is driving around with our J4 in it as is the M939 Truck, a staple of the Army’s troop movement equipment.

We are designed into commercial applications as well in construction vehicles and mining equipment. Anywhere that the environmental requirements are above average, and field failures are unacceptable.

Have it Your Way, at CPI

We’ve focused hard on switching technology for over 75 years. That’s why our off the shelf J4 switch is good to go for 90% of the applications that come to us.  But if you have some truly insane requirements, that’s no problem either. In the past CPI has provided custom version of our J4 for production runs that included a wide variety of modifications to the basic stainless steel switch.

There’s even more that is possible, when working with the world’s leader in high durability, extended endurance switches.

Don’t be neutral about your choice of switches!  Call CPI today to speak to our engineering team about your application or to get a sample.