Engineers and procurement specialists at companies large and small deal with the challenge of part and product obsolescence each and every day. Typically it goes something like this:

A subcontractor who make one or more critical parts for a larger machine or system, has gone belly up. The system is still deployed in the field and the cost and logistics of replacing it makes this option a complete non-starter. So when the sub-component breaks, spares become a problem very quickly.

In another scenario, particularly in military equipment, the list of manufacturer’s able to supply a component has dwindled to a few or even just one (single source) As a result, than manufacturer has jacked up the price for their part from $15 per part to a whopping $785.27 per part. While that still may be a fraction of the cost of the system, it doesn’t make anyone happy to know they are paying a premium just because there is no competitive or qualified alternative.

Solving product obsolescence challenges is seldom a matter of buying a different off-the-shelf item. It usually requires re-engineering, specialized design, and even re-qualification of the new sub-component and/or new solution. At CPI this is exactly what we’ve been doing for decades: taking our line of extreme duty electro-mechanical switches and sensors and making incremental changes to adapt them to new (or old) applications. It’s the bread and butter of our engineering competency.

In a heavy duty hydraulic cylinder application, Dupont had designed their system using Curtiss Wright linear position sensors (long stroke LVDTs) which have been discontinued.  After discussions with our engineering team, Dupont chose our SL0390 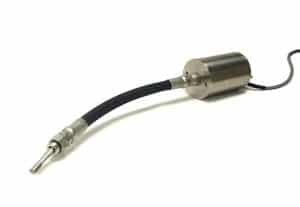 as a replacement solution to monitor the stroke position on so called “intensifier cylinders.”  These intensifiers are high pressure hydraulic devices that inject initiator into polyethylene autoclave reactors.  They picked the SL0390’s for this application because it was easy to adapt their existing external mounting hardware to the SL0390 from the old LVDT sensors, which were about 24” long.  According to the customer, the environmental conditions for the SL0390 installations are indoors and out of the weather, but not climate controlled so a level of robustness was a necessity.

Per the Dupont Engineer, “The environment for these cylinders is industrial and often times hot and dirty just like any petrochemical plant along the Gulf Coast.  We installed the first SL0390’s in June of last year (2017), and have been replacing others as the old LVDT’s fail on the other cylinders on the all of manufacturing units.  To date, all installed SL0390’s are still in service and working properly.”

We’re not surprised. The SL0390 sensor is built to take a licking.

Chinhook Helicopter became obsolete, CPI was chosen to replace these thermal switches. We were able to do it with small modifications to one of our own thermals.  While the original switch was most similar to our AD096 bi-metal thermal switch, the 7/8″ mounting thread and ITT connector required were not part of our standard offering. With simple modifications, CPI created the AD192-502, a form, fit function replacement.

Another consideration is that CPI can make these parts for small production runs, the kind that bigger companies won’t be bothered with. The above run was for 40 pcs, though CPI is fully able to scale production to thousands of parts per month out of our USA based manufacturing facility in East Hanover New Jersey.

Retrofit and Obsolescence are Friends of Ours.

For over 70 years, our product line has succeeded in the worlds toughest application scenario’s.

Call us today for more information.