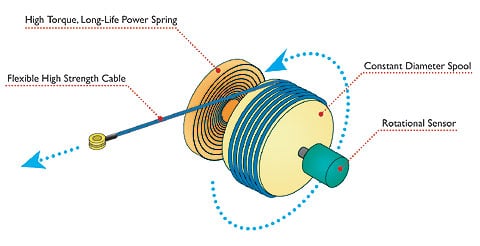 In ancient times when cave men were trying to measure the linear displacement of things they cleverly came up with something called a “String Pot”.  Using only stone knives and bearskins, they were able to cobble together a spool with some “string” and attach it to the object whose position was to be measured. Then with a simple potentiometer (resister) attached to a wiper, they could measure variable resistance (voltage) as an indication of position.

But as man began to walk upright, the drawbacks of string pots became apparent:  the strings broke; the spools were unreliable, they had limited accuracy, and of course the potentiometers wore out because of the contacting nature of the technology. But they were cheap to make and worked well-enough to be a tried and true technology for decades, especially in labs where environmental conditions were not a factor. It was straightforward mechanical technology. Easy to understand, easy to deploy. It required less complex electronics and signal conditioning.

What is A Draw Wire Sensor?

It turns out that String pots are really a type of draw wire sensor. This class of sensor is marked by its use of spooled wire or cable of some kind that is attached to a moving object whose linear position is to be measured.

In every area critical to durability and performance, CPI has extended the design of the class of linear transducers known as “Draw Wire Sensors” into something perfectly suited to reliable usage in extreme environments. The results are not only patented, but result in performance and durability parameters that bear little resemblance to their string pot ancestors….

For large scale powerful hydraulics, or hydraulics deployed in heavy duty vehicles, or cylinders operating underwater, or in highly vibrational and corrosive environments, our SL series position sensor technology is arguably the only high reliability hydraulic cylinder linear position measurement solution of any technology in the world.

For more information visit us at www.cpi-nj.com.