CPI’s X1 thermal switch is being increasingly used by both American and European avionics manufacturers and integrators as their thermal switch of choice for spot detection of overtemperature conditions in systems throughout the aircraft. Recent integrations include FAA approval as a Fenwal replacement on Gulfstream jets, use in the De Havilland “Twin Otter” aircraft, and use by specialty aircraft manufacturer Diamond Aircraft in Europe to name a few of the most recent.

But actually, CPI’s thermal switches have been flying around the world in commercial aircraft for decades. The recent uptick in design-ins may have something to do with manufacturers realizing that in addition to superior thermal performance, vibration resistance, and electro-mechanical endurance, our switches are just a whole lot less expensive than Fenwal, and other solutions commonly used.

All modern aircraft employ a number of thermal sensing elements for various systems. So called Spot Fire Detection Systems refer to systems where overheat conditions are monitored at a specific point in a compartment or LRU bay.  In order to receive FAA approval, these systems must demonstrate superior detection performance and have the proven ruggedness to survive in the harsh thermal and vibrational environment of modern aircraft.

Typical zones on aircraft that employ spot fire detection include:

Several detectors, or sensing devices, are available to solve these detection challenges, encompassing a number of different technologies. Many modern aircraft have some type of thermal switch system or thermocouple system. A thermal switch system has one or more indicator lights or audible alarms that trip when a thermal limit is reached.

They are sometimes connected in parallel with each other but in series with the indicator lights. If the temperature rises above a set value in any one section of the circuit, the thermal switch closes, completing the light circuit to indicate a fire or overheat condition. No set number of thermal switches is required; the exact number is usually determined by the aircraft manufacturer. On some installations, all the thermal detectors are connected to one light; on others, there may be one thermal switch for each indicator light.

Recently CPI thermal switches like our X1 have seen increasing use as replacements for other thermals owing to their extreme mechanical endurance, setpoint precision, and much lower unit cost making them extremely good choices in spares and retrofit applications. In a recent retrofit application undertaken for a Gulfstream, the CPI X1 thermal switch was qualified to replace the equivalent Fenwal Switch for almost half the cost. The CPI X1 Thermal Switch has 100% equivalent functionality and accuracy with arguably superior electromechanical endurance. 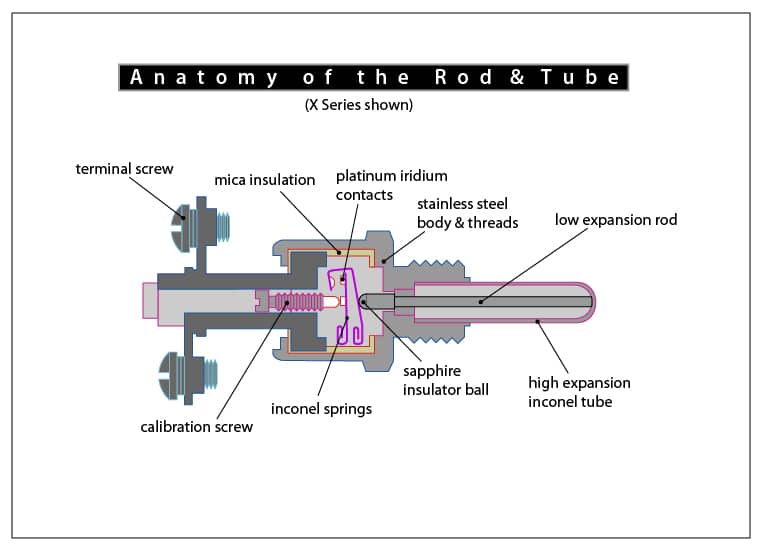 CPI’s X1 Series thermal can maintain a setpoint anywhere from 0 to 850F, with a +/- 5F tolerance standard. Tighter tolerances are available. CPI thermal switches are made entirely in the USA at our manufacturing facility in East Hanover New Jersey.

Consider CPI Thermal Switches for your Next Spares Order

It makes good economic sense to consider CPI thermal switches for your next retrofit program, or as a design-in when your current thermals are too scarce or too expensive, or both! CPI’s USA made thermal switches are readily available through distribution, or directly from the factory for special configurations.

CPI Thermals Do Their Part to Thwart Bank Robbers