Lets face it… electronic stuff packed away in some cramped, poorly ventilated enclosure can get hot. Really hot. And CPI thermal switches are one of the planet’s best solutions to monitoring and shutting down hot equipment in remote places before bad things happen.

But what about when things get cold? Like really really cold? Like when it’s so cold your electronics can’t function properly or accurately? What is an engineer to do then except put on some extra layers and hope for global warming?

It turns out that CPI is one of the very few manufacturers of high endurance thermal switches that can do low temperature set points. Well below freezing in fact, and we do them reliably. Take our standard M1 Series Bimetal Thermal Switch. Our switch can be programmed to a set point of -17C to 343C with tolerance of +/- 2C.

Not long ago we shipped GE some of our thermal switches for use on a Wind Farm project developed on a 540ha site in the East Dam region of Bac Lieu province, Vietnam, the 99.2MW Bac Lieu near-shore wind farm is Asia’s first offshore wind farm in the Mekong Delta region. 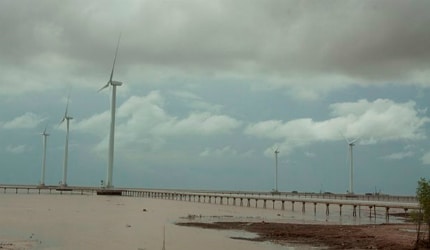 Our M1001 was deployed here as a fail-safe detector in the following way: The windmills depend on critical voltage converters to translate the mechanical energy of the turbine to electrical energy. But these converters have a lower limit on the temperature under which they can safely operate. Our switch is meant to be a cold temperature indicator that the converter controller software reads. If the temperature hits the low temperature set point (in this case -3C) it is a signal that the internal heating system for the voltage converter has failed to turn on. To prevent a failure, our switch sends a signal to fault and shut down the converter.

The phased development of the Bac Lieu wind farm included the installation of 62 1.6MW wind turbines, supplied by General Electric (GE). Construction commenced in September 2010 and the first phase was grid-connected in May 2013. The wind farm became fully operational in January 2016.

For over 70 years CPI has been making thermal switches that go where other technologies can not. Whatever your thermal application, hot or cold, CPI is likely to have the most robust and reliable standalone thermal switching solution you will find anywhere.

Call us today to discuss your thermal switch application.