In addition to providing advanced electromechanical switches and linear position sensors for harsh duty applications around the world, CPI also holds intellectual property rights for a number of engineered system designs. Perhaps one of the most promising is the RPG shield initiative, an Active Protection System (APS) which explores the possibility of protecting our military from one of the most insidious and prevalent threats on the battlefield.

A System And Method For the Rapid Aiming And Firing of Defense Countermeasures.

APS systems have seen much R&D by the military over the last decade, owing to the demonstrated vulnerability of battle tanks, Humvee’s, and helicopters on the battlefields of Iraq, Yemen, and Syria to name a few. To be effective in real-world combat scenarios, an active RPG defense system must be capable of aiming and launching countermeasures within 100 milliseconds (100ms) from the time of threat detection.

According to sources with combat experience, the RPG is most typically a “100-yard weapon”. Adversaries know that to be effective, the RPG needs to be fired at close range. The RPG-7’s maximum flight velocity is around 300 meters per second, so assuming roughly 100 yards to target, it could take as little as 300 milliseconds from launch to impact. Given that any (aimed) active defensive system must detect the inbound threat, classify it, process a response, and aim and launch the countermeasure before the threat makes contact; a realistic system design goal would require the aiming mechanism to be capable of addressing a threat from any direction in 100 milliseconds or less. There is presently no traditional “gun and gimbal” turret system that can aim this rapidly.

Existing RPG defense systems under development by Israel include their Trophy system which has been deployed and has seen some success on ground vehicles however the US military declined to take delivery on the Trophy system due to concerns about the large lethal zone and the associated high danger for friendly soldiers in the area. In general, current launcher or turret type systems suffer from one or more of the following problems:

1. Long system reaction times (includes time to aim a countermeasure)
2. Long seeking radars used to improve detection range can also be used to find/track the vehicle.
3. Large uncontrollable lethal zone for shotgun type countermeasure.
4. Limited zone of engagement as turret’s may require shields that prevent 360 degree rotation.
5. Limited multi-hit capability, they require reload after firing once or twice. Most systems have only 2 to four countermeasures available prior to reloading.
6. Heavy weight of countermeasure launchers (guns) and need for multiple guns for simultaneous thread defeat.

For RPG defense, a continuously-rotating countermeasure aiming and launching system provides a much faster response than a traditional “gun and gimbal” turret system. Many active RPG countermeasures are self-propelled munitions. They do not require robust gun barrels for launch. They may be launched from short tubes that are little more than storage capsules. Self-propelled munitions also do not produce significant recoil. We propose a design of a fast aiming-and-launch system in the form of a rotating drum. This drum-shaped countermeasure launch container houses multiple munitions, each in a short launch tube, in an outwardly-facing circular array. The circular array lies on a plane perpendicular to the drum’s axis. Given that the launch tube is only about as long as the munition itself, this circular array could be realized in a drum-shaped launcher whose overall diameter is slightly larger than twice the length of an individual countermeasure round. Rotating the drum about its axis creates a situation in which any point, or multiple points, on a planar azimuth of rotation are continuously brought into the line of fire of the munitions in the array. Any point within a full 360 degrees can be targeted in the time that it takes to rotate the nearest-available munition (array element) to that point. In one example, 8 countermeasure munitions are arranged in the outward-facing 360 degree circular array with munitions spaced equally every 45 degrees. In this example the drum must rotate (at most) 45 degrees in order to bring the nearest munition to any point around a 360-degree azimuth. Depending upon the rotational speed of the drum, the time required to bring munitions to bear could be on the order of milliseconds. The preceding description provides a rotational turret capable of firing 8 countermeasures. However a drum-shaped launcher suggests the possibility of superposing (stacking) multiple arrays of countermeasures. So a single drum-type launcher is capable of firing 16 or more defensive munitions prior to reloading and would not potentially require a second instantiation of the turret for multiple threat detection. 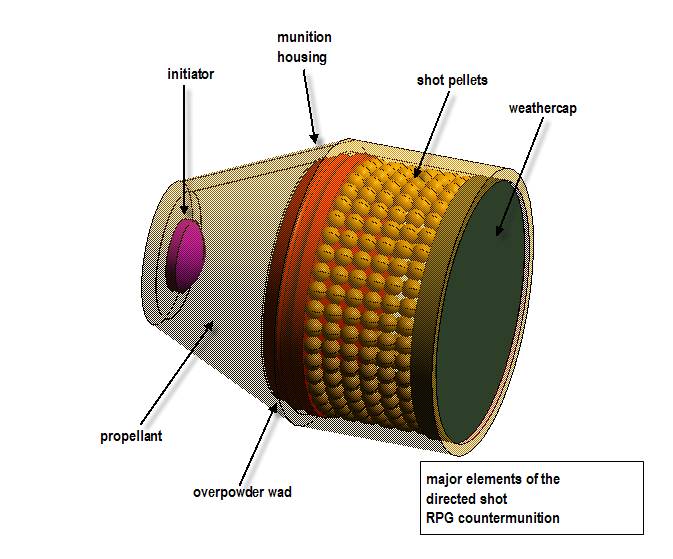 Further calculations on a drum that rotates about as fast as a ceiling fan (300 RPM), show that a countermeasure could be delivered to any point on the azimuth in 25 milliseconds or less. This is roughly the amount of time that it takes an RPG to cover about 7 meters.

Another potential advantage of the system is the ease with which a LIDAR system for threat detection could be implemented by fixing a laser triangulation sensor to the top of the rotating launcher. This could be coupled with an IR sensor for further detection reliability. A unitized system like this could be made highly portable and light, suitable for air as well as ground vehicles.

For more information on the CPI RPG defense system,
contact Cliff Moodie at 973-887-9400